An early Happy New Year wish to all of you. We've got a portrait mural for you today of a Los Angeles poet, Charles Bukowski.


It's nice to know I share turf here in East Holly with this guy. Actress Barbara Hershey is the only other artist I know who claims being from around this peculiar part of town. Bukowski was from Germany, but around Fountain and Normandie is a dedicated district for him. I'll put a mural from that particular area next week. 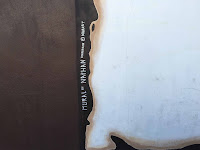 Here's the rest of this portion of the mural with a quote from him.

And here's the maker's mark for Nathan Anderson. He's got a website, so make sure to check him out - www.naarrt.com.

Down the wall just a bit further to the east, the artist has rendered a stack of Bukowski's books, propped up as it were against the building's side door.

And here is a full street context shot:

You can find this up in Los Feliz village on Vermont Avenue, just north of Hollywood Blvd. I believe this is at the corner of Kingswell. This used to be camera shop and two of my friends from high school, Nestor Vargas and Dan Bootzin, had a mural here for years advertising the photographic arts. They were my Kouheis in music and art. Ya wonder what happens to those people. Never shot a picture of their mural though. It was fun.

My Ex was a reader of Bukowski and his circle. Never got into reading his stuff because of that. Couples are funny that way sometimes. One person gets into something or a particular writer, and the other kind of feels it's an intrusion into their turf to follow too deeply into it. Only when they start endlessly sharing and prompting you for reactions can you then feel like you've been given permission to enter.

Now that I no longer have a horse in that race, I have since read some of his poems. There's a lot about physical suffering from the insults to the body, a topic to which I have become highly sensitive of late.

Here's one poem I will share that other middle-age people who have faced many new years, and crumpled in the face of their relentlessness might appreciate as we stagger into 2016:

washed-up, on shore, the old yellow notebook
out again
I write from the bed
as I did last
year.
will see the doctor,
Monday.
"yes, doctor, weak legs, vertigo, head-
aches and my back
hurts."
"are you drinking?" he will ask.
"are you getting your
exercise, your
vitamins?"
I think that I am just ill
with life, the same stale yet
fluctuating
factors.
even at the track
I watch the horses run by
and it seems
meaningless.
I leave early after buying tickets on the
remaining races.
"taking off?" asks the motel
clerk.
"yes, it's boring,"
I tell him.
"If you think it's boring
out there," he tells me, "you oughta be
back here."
so here I am
propped up against my pillows
again
just an old guy
just an old writer
with a yellow
notebook.
something is
walking across the
floor
toward
me.
oh, it's just
my cat
this
time.


Happy New Year to you all! The daily picture blog will reassert itself on Monday, January 4, 2016.

Until then, Love and Peace,
Pops