Dear Street Art Lovers and everybody else,

Are you feeling like you're on the margin today? Left out? Shunted off to one side? Left hanging? Just hanging on? Lost? Well, you're not alone, to wit:

This pair of kids was just hanging out on Hollywood Blvd., right near the freeway on-ramp.

After finding them, running an errand, and walking back the same way I came, I encountered this young man, shielding his eyes from the bright sun, looking for the way.

Artist unattributed, Be Humble, Be Noble, paint on building overhang.

When property owners construct buildings in this fashion, with no regard to the general frontages of the neighboring buildings (of which there are many in Hollywood), you get very jagged storefronts. But you wind up with these long vertical, shotgun-like panels for muralists to stretch their imaginations upon, like the side panels of medieval triptychs, except that there's no middle or complementary panels.

In case you didn't know, Hollywood, my hometown, is a destination for runaway children (much to the advantage of the prostitution and pornography industries) and always has been. It's famous, the climate is warm; all the same reasons everybody else moves here. So, the presence of these unattended children on the Boulevard raises no eyebrows.

I guess when you buy that one-way Greyhound ticket to Hollywood, it's all about hope, but anyone who lives and stays in Hollywood for any length of time (everyone tries to to move to Culver City, the Westside, or the suburbs after a year or two) there's just a regular exposure to destitution, deferred maintenance, dense population, and homeless panhandlers that can just harden your heart into a mechanical construct as you try your damndest to look past all of that and feign interest in the numerous souvenir tee-shirt shops run by Asians and Middle-Easterners up and down the Walk of Fame. [Was all that god-awful depressing prose just a set-up for this nice piece of street art? You decide!]

By the way, this heart can be found at the corner of Melrose and Normandie, probably one of the busiest corners in L.A. where two two mostly residential streets intersect, handling more traffic than it was ever designed to, because the Hollywood Freeway has an on-ramp and an off-ramp are off on side streets and lots of people have to make left turns. If you can avoid the Melrose/Normandie off-ramp, you're advised to do so, but it's really unavoidable if you're headed into West Hollywood and Beverly Hills.

Ah, gotta pay the rent. Have a wonderful Thursday!

Posted by Unknown at 9:04 AM No comments:

Are you feeling proud for any reason today? Maybe you're a Chicago Cubs fan and like all sports fans, you're feeling especially proud for an accomplishment you had absolutely nothing to do with. Hey, as the world's laziest man, I think that's great! Because I've got a couple of proud birds for you today; the bird that says "pride," the peacock.


I've been wanting to share this one for a long time and have been waiting for a day when the cars were not there, but it has never happened. The peacock is long gone. This last summer it was painted over to stump for Bernie Sanders, and now there's something else. But this was located off Hyperion between Fountain Junction and Tracy.

Peacocks are a common subject for muralists. I think it's obvious why. Lots of color, brashness, high contrast, lightning-quick recognizability. Did you know peacock feathers are really brown? And the guy birds only grow them for mating season, then they molt off (getting longer each year).

Here's another proud fella on Hollywood Blvd., right at the freeway on-ramp. There are several colonies of feral peacocks in Southern California. If a local artist wanted to do some life sketching, she or he need go no farther than Palos Verdes or the Arboretum. You can too. I think I've seen them at the L.A. Zoo too. You cannot view this mural in person except behind a chain-link fence. Thank goodness for camera phones that have tiny lenses that can pushed through gate openings to get unobstructed views.

I knew of another peacock mural on Olympic and I went hunting for it this last Sunday, but alas, the building it grace had been demolished. Sic transit gloria mundi.

Here are alternate views for you: 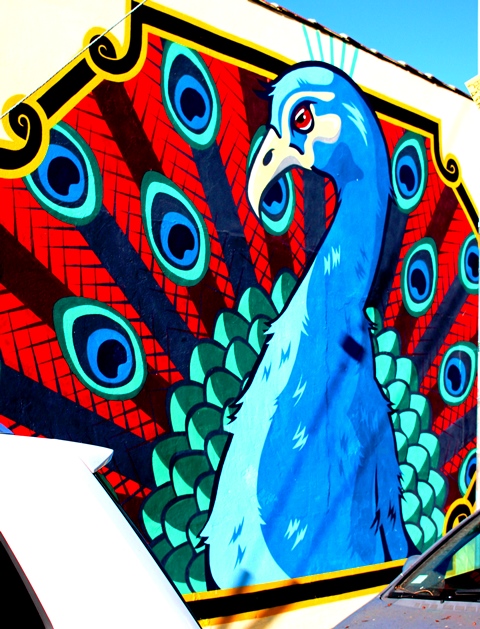 Have a wonderful Thursday, all of you!

Posted by Unknown at 7:58 AM No comments: