It's a blue Wednesday in Malibu today. You've seen this before. Nothing for the "notable file"; just adding it to the data stream. 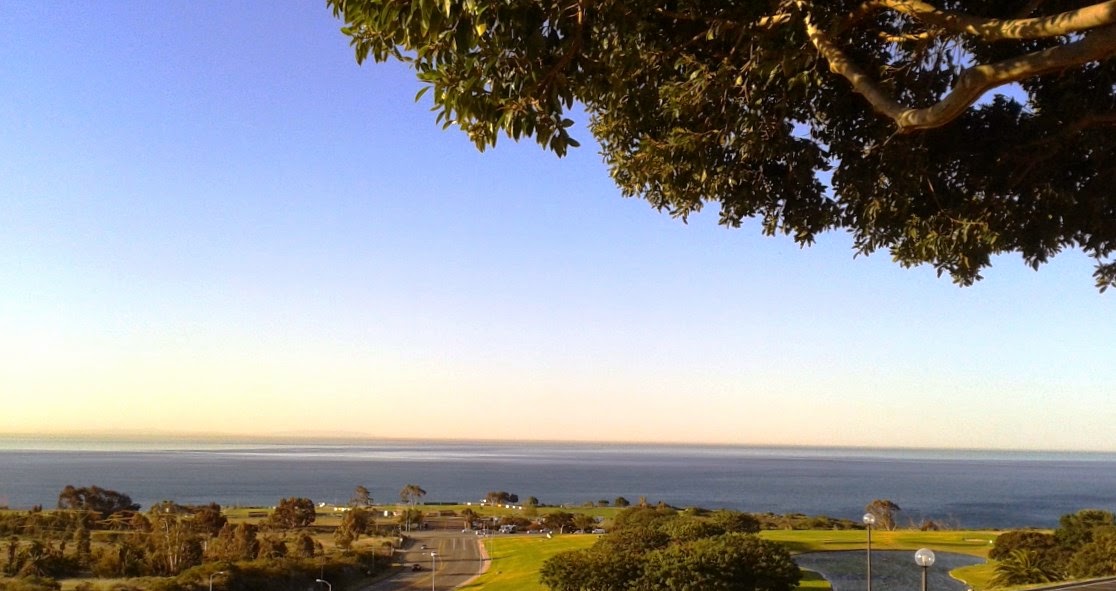 There are high winds blowing out of the canyon this morning. Maybe 45 mph? The winds are dry and hot, so there's hardly any ambient moisture. You step into the A/C office building and realize you're sweating a lot. 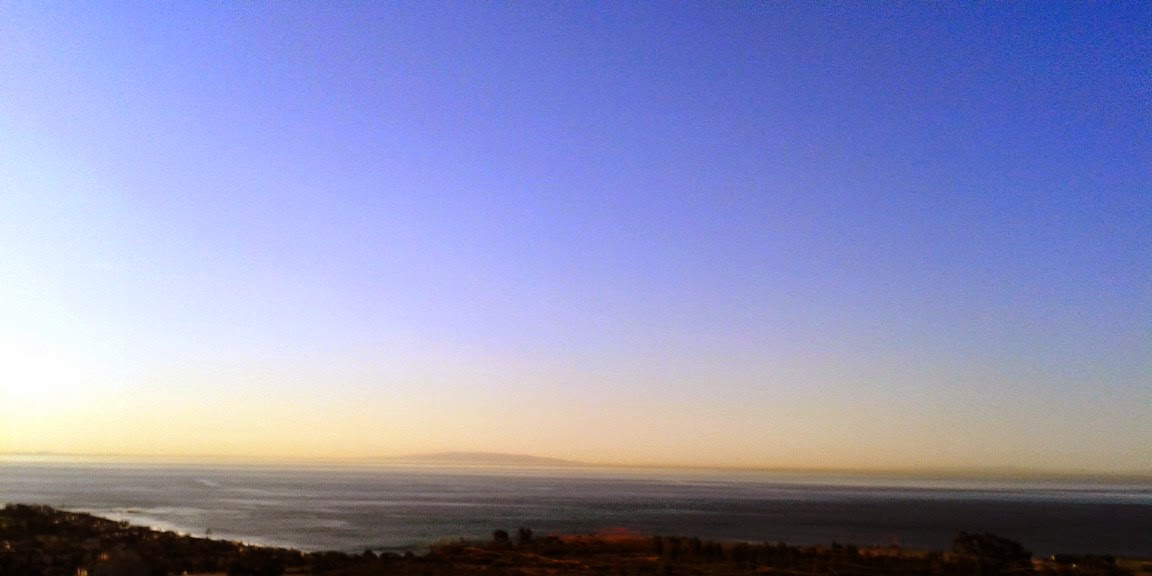 I moved to a slightly different viewpoint here. You can barely see the peninsula. The red smog buildup is just waiting out there.

When you're walking uphill against the winds it feels like someone pushing you back, not hard, but consistent. I think we're in a pattern here until Friday. They don't put up the flags here if it's too gusty. Yesterday the flags were flying straight out. If it's still blowing hard tomorrow, I'll experiment with video and post it (they're memory hogs though).

On the bus this morning coming up the road, the ocean was silver-white. By the time I got to campus, the phenomenon had ended. Too bad. It only happens for a few minutes on clear days near sunrise and sunset.

As I said yesterday, the ocean seems like a grassy field sometimes. I cropped this one to focus on the seeming pathways and swatches that appear on the surface. I'm sure if you're out there on a boat, you just see wavy water...

Have a great day.

Posted by Unknown at 8:13 AM No comments:

Hello gentle readers,
Here's today's photo. Clear and windy this morning. Nothing at all in the sky at 7:50 AM. 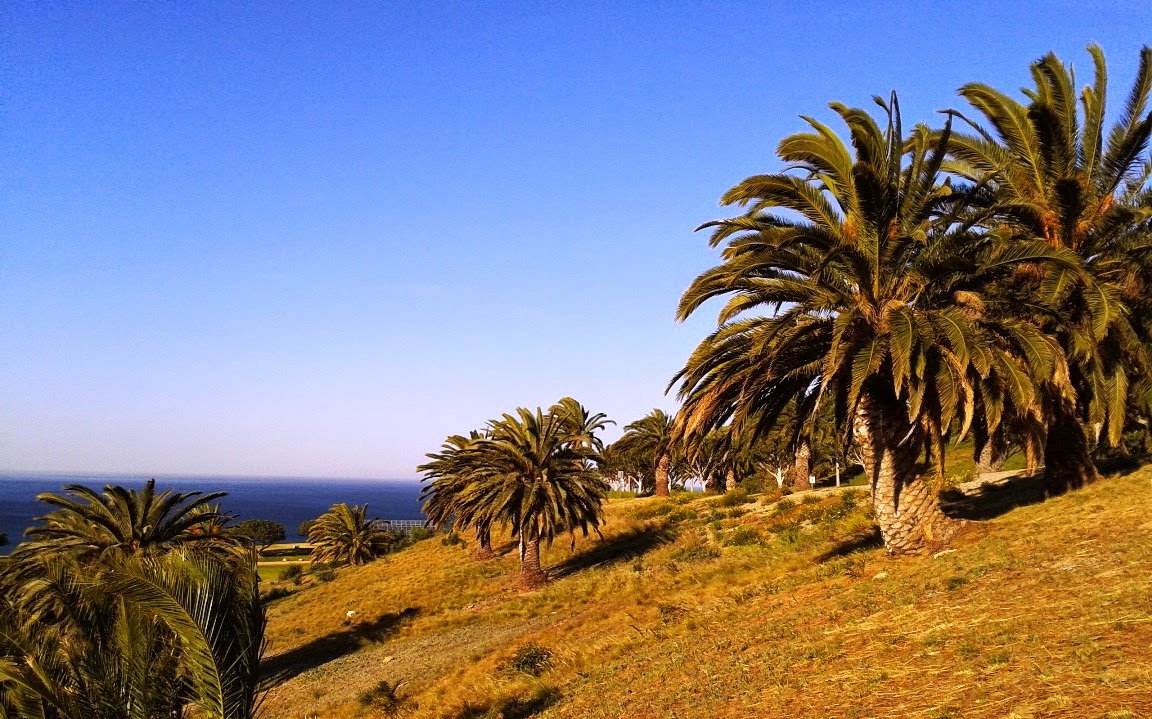 On extremely windy days like today, the texture is in the water. It's hard to capture with this camera, but you can sort of see different colors in the ocean. It's like looking at a field of grass and imagine that certain species of grass predominate in one area versus another.

Another ocean shot with a little more sky. Basic blue-on-blue stripes today. Supposed to be 90 degrees Fahrenheit in L.A. today.

Let's see what tomorrow brings. Supposed to be 90ish all week. I"m betting three days in a row exactly like this.

Posted by Unknown at 9:01 AM No comments:

Happy Monday everybody. Hope you had a good weekend. For some reason the usual parking lot shots didn't save. I did snap off some pictures of the deer family that grazes on the front lawn. 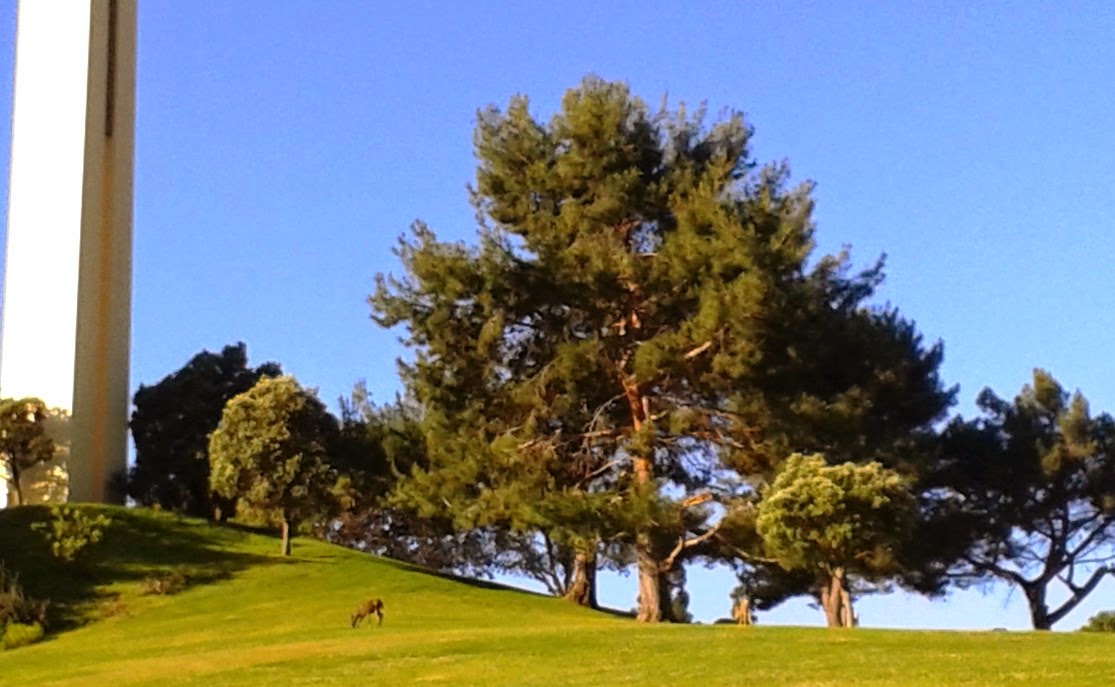 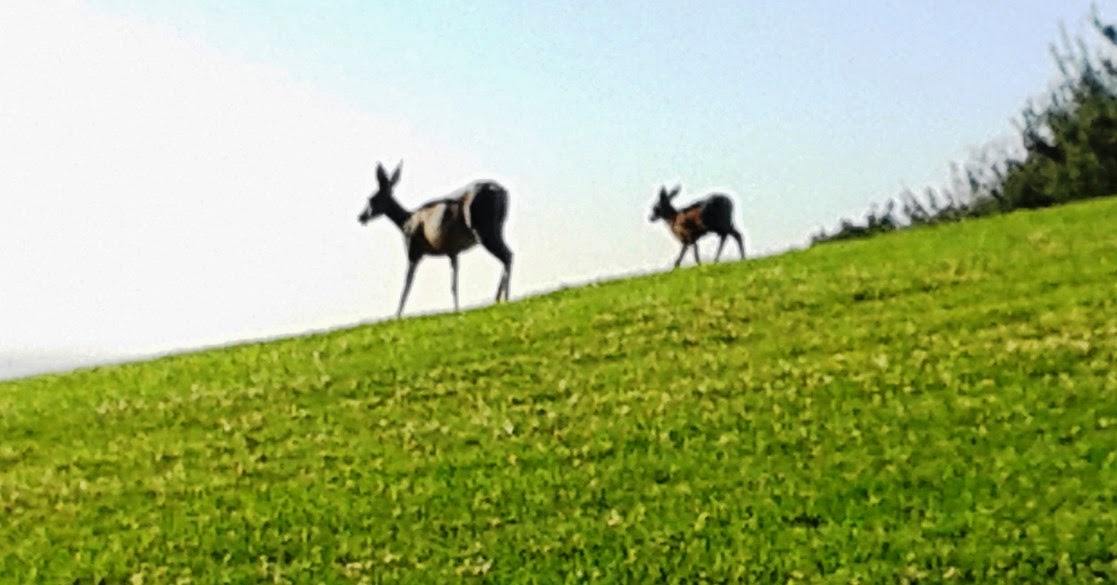 The sky was basically cloudless this morning, so had the exposure saved it would have been the blue-on-blue that I've posted at least once before. I learned this morning that the auto-focus on my phone camera doesn't do so good in mid-range. As I approached the deer and took a few more, things just got blurry. I maybe need to hold still too.

Here's the mama deer with little guy. It is a young one, it's not just farther away. 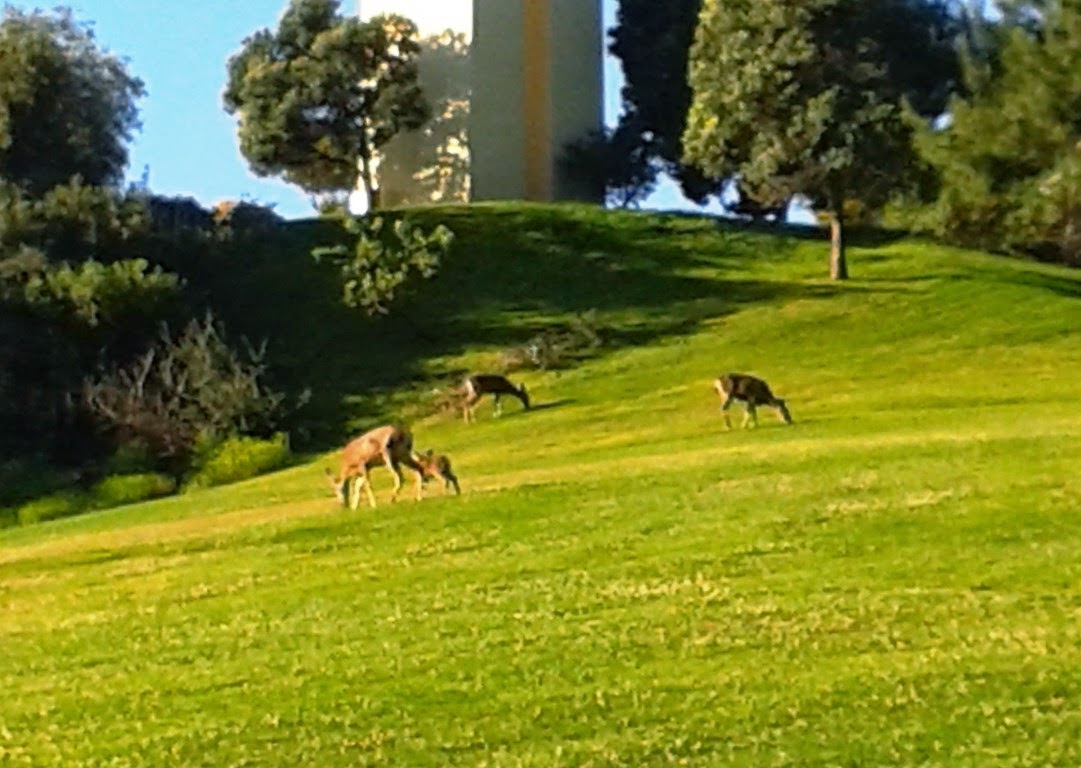 Here's the group together. There are a few more outside of the frame down the hill. Mother -and-child thoughts are on my mind this morning. Someone close to me (a first-degree female relative) said they have their first baby on the way. Exciting news and a change of life and perspective for them. Blessings.

My youngest is 21, and like many of her generation, delayed getting her driver's license. She got it. I consider that the culminating act of my role as a supporting parent. When the nest empties out, what's next? Watch this space.

And of course, you mask bad photography by using all that edit-picture stuff that software gives you. Isn't this cheesy?

I took a quick drive down to San Diego to go watch an IMAX movie called Journey to the South Pacific just to see if it could give me any context for my mythical Dog Island in my book. Unfortunately it was more about the tropical fish and turtles in the reef around the islands of West Papua. I'm really more interested in the people and the way of life there--the only human depictions were smiling happy brown people chopping up coconuts and little kids playing in the lagoon. Oh well, it should help the tropical fish store business. Guess I just have to go there and spend time. (In case you haven't figured it out, my story, at least the Dog Island part, is my riff on the cliche desert island gag.)

Rain was predicted for Saturday, but this was all that was in the sky on the way down. This was taken from the rest stop on the Camp Pendleton property between north San Diego County and South Orange County. 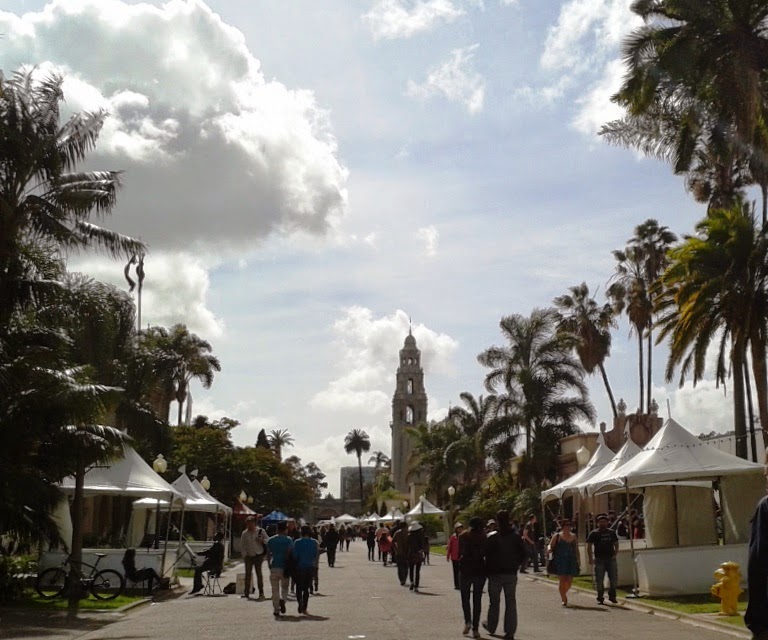 After I got out of the theatre at about 5 PM there were a lot of clouds in the sky. They had the effect of giving you very silvery light. This picture really captures how I felt about the scene.
They were prepping for some festival the next day. 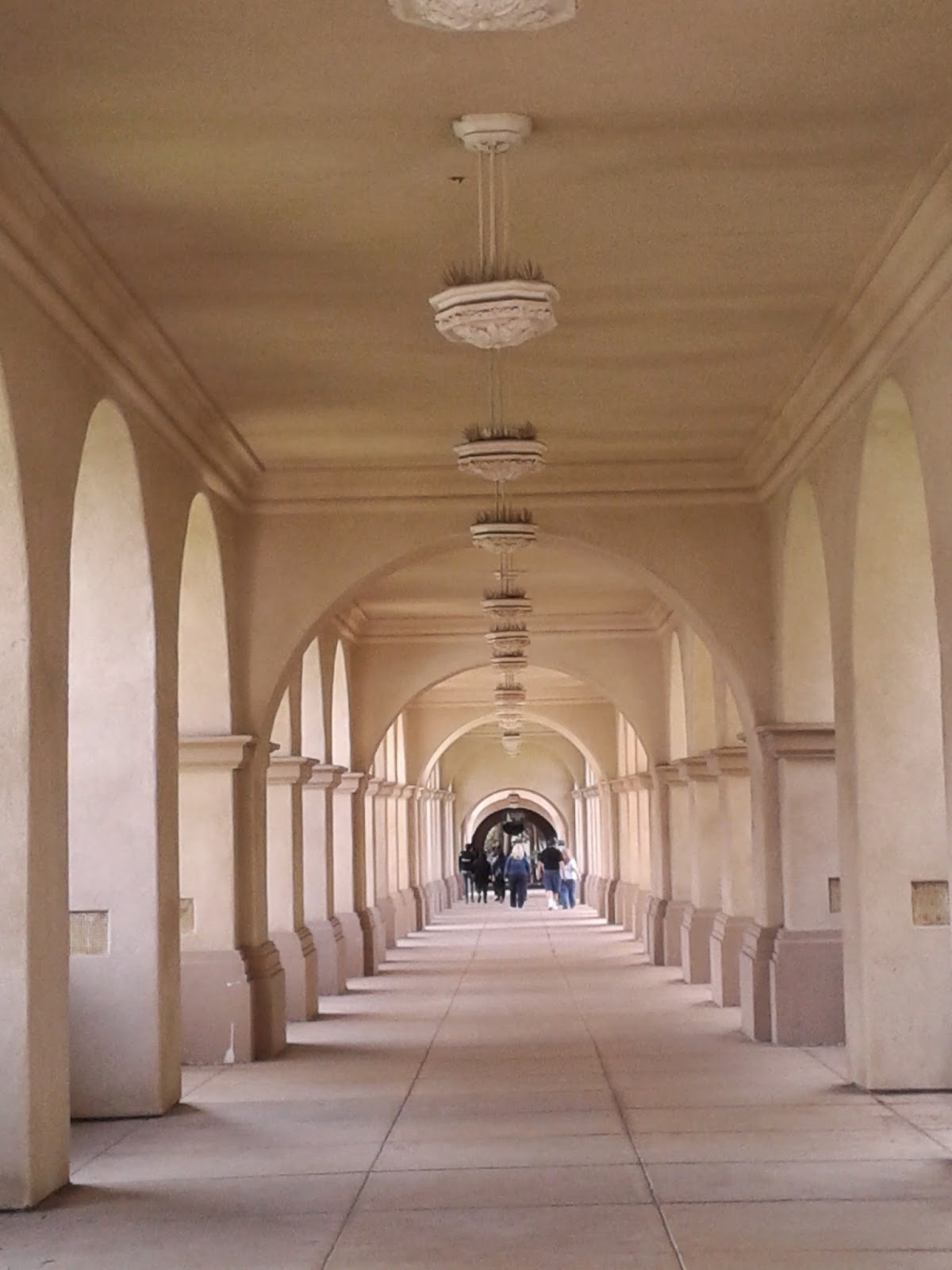 This covered walkway gave an entirely different mood just a few steps over. 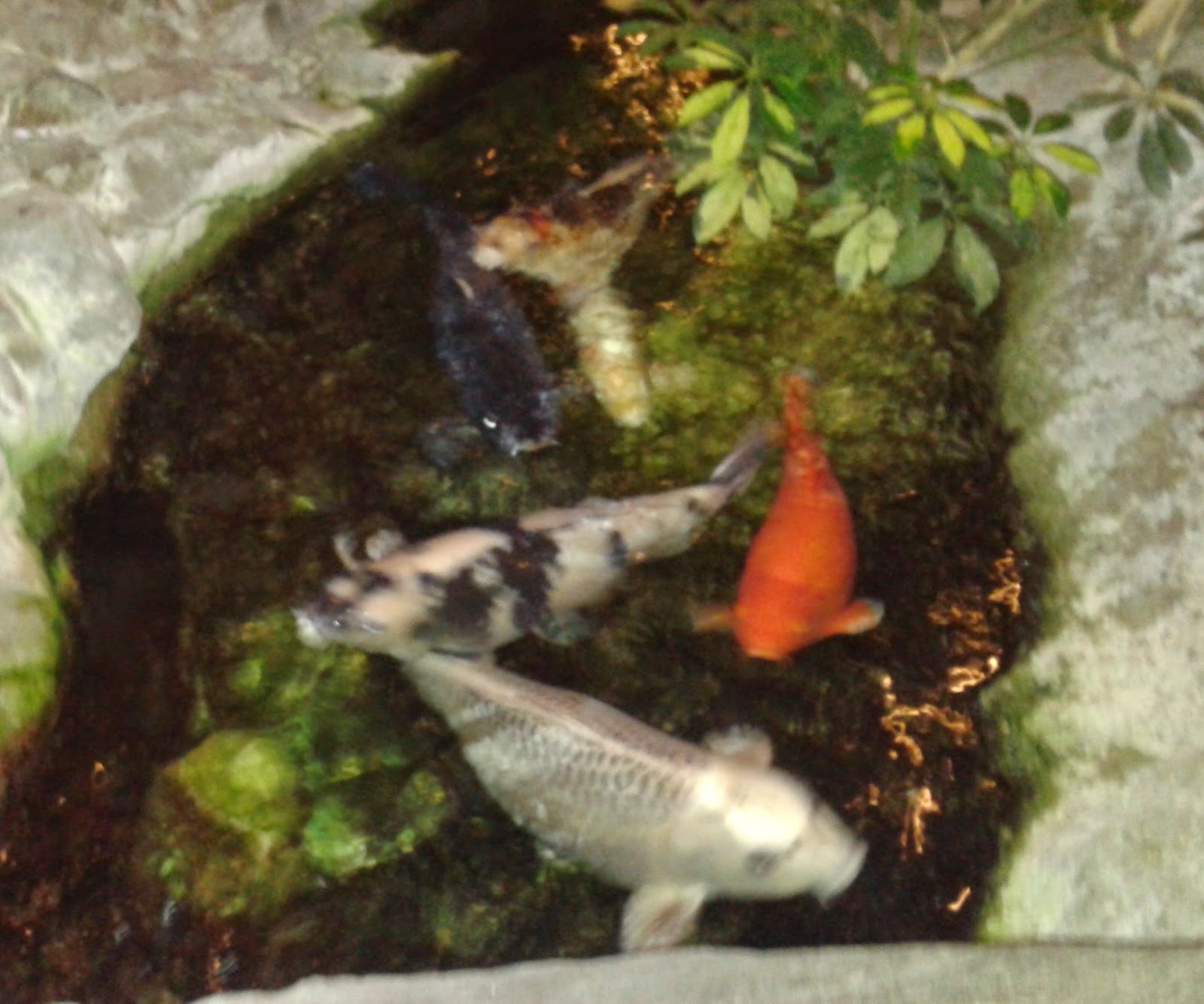 Sadly, I could not think of anything else I wanted to do in San Diego, so I just came back. I stopped by a hotel in Downey to look at some koi. Someone told me about this amazing indoor pond. I have an interest in koi because I intend to include them in a painting I have planned to do one of these days. According Chinese legend, koi are the nymph stage of a developing dragon. Sorry about the blurriness--again, I am just learning how to use this camera phone. That's all for today.

Posted by Unknown at 9:43 AM No comments:

In today's installment Clete finally runs a class (the second session actually), but it's really like the last session never ended and they just pick it right back up with all of their contention trying to see what this guy is made out of. No way Qin Qin can be right about this oddball fellow is there? What is the problem with these girls? Can't they just sit and act good? Buncha goddamn princesses.

Thanks for reading.
Love,
Pops


Personal recollection of Wen, the 2nd Phoenix Guardian Princess of the South

My little cousin in her role as the Guardian Princess of History, Prophecy, and Lore asked to interview me on her recording device. She wanted me to describe our first real class with the Professor. I don’t know exactly why she wanted my viewpoint. I think she believes I had a particular interest at that time and wants to capture that bias. I told her I have no interest in putting anything on record in my spoken voice. I just don’t like my voice, I sound too timid and tentative to myself. And to say something out loud will capture something of my feelings. That’s not something I am comfortable doing. I agreed to write something up for her.

First a word about my dear Mother, the First Princess Feng. She seems progressive to others, but really, she is about as conservative as they come. She will always take action to promote my welfare and success, and the other Seconds as well, and that will appear to be innovative, but she is really a true conservative. She craves order, predictability, that things are done the same way every time. I admit now that I am rather the same as her. She fears change. Had she only known what she was starting when she forced the Professor to tutor us all.

On the first day of instruction we took our usual seats in age order. Mother, as the chief educational officer of the Island, had ordained this logical seating years ago, and it was maintained by Yamada Sensei when she was here. Age order was always in our heads. Whenever we sat together as a group, Xiaomei was always on one side of me as the elder and Fei on the other as the younger. But the Professor would have none of that ordering tradition. He was a disrupter from the start. It puzzled all of us that he chose the most academically inept of us, Qin Qin, as his research assistant. I don’t want to say stupid because she is not. She is impulsive and moves forward without thinking.

He came into class late. I’m sure that was intentional. He employs all kinds of manipulative tactics like that all the time. Unfortunately they work. He even reveals them to us so that we will know how to use them on others ourselves—but even then I find he has moved my mood and discomfort to exactly where he wants it to be. He is such a sneak. And so transparent. But I still love that about him. He issued us an order: