Dear family, friends, and gentle readers,
Here's your picture of the day: 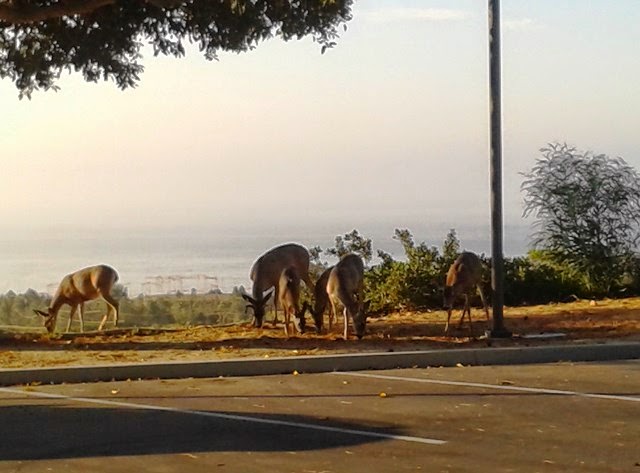 I guess I should call this one "Repetition #45" or something like that. The drought continues.

It's starting to be "Deer Week" here on the blog.  After slogging up the hill this morning I stumbled right in to the deer family. They didn't bolt and run for some reason; guess I'm starting to smell normal to them.

Those who follow my Tweets (@vway3) got this picture this morning. 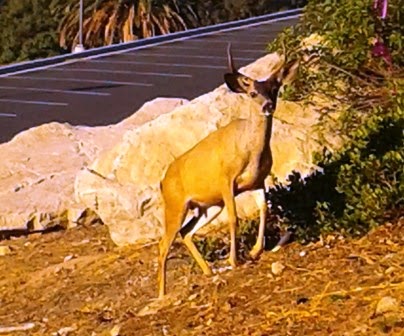 This guy came up to join them after a couple minutes. Call it wimp-iness or old age, whenever I get this close to wild animals of nervous nature with horns on their heads I get uneasy. So I guess we were at a draw today. And yes, I was that close.

Hope you have a fine Thursday. I'm going to a church rummage sale in Malibu today. They do this every summer and give Pepperdine people a head-start day.  It's interesting to see what people in multi-million-dollar homes give to charity as junk.

Posted by Unknown at 8:30 AM No comments:

Wednesday is here, and here is your picture: 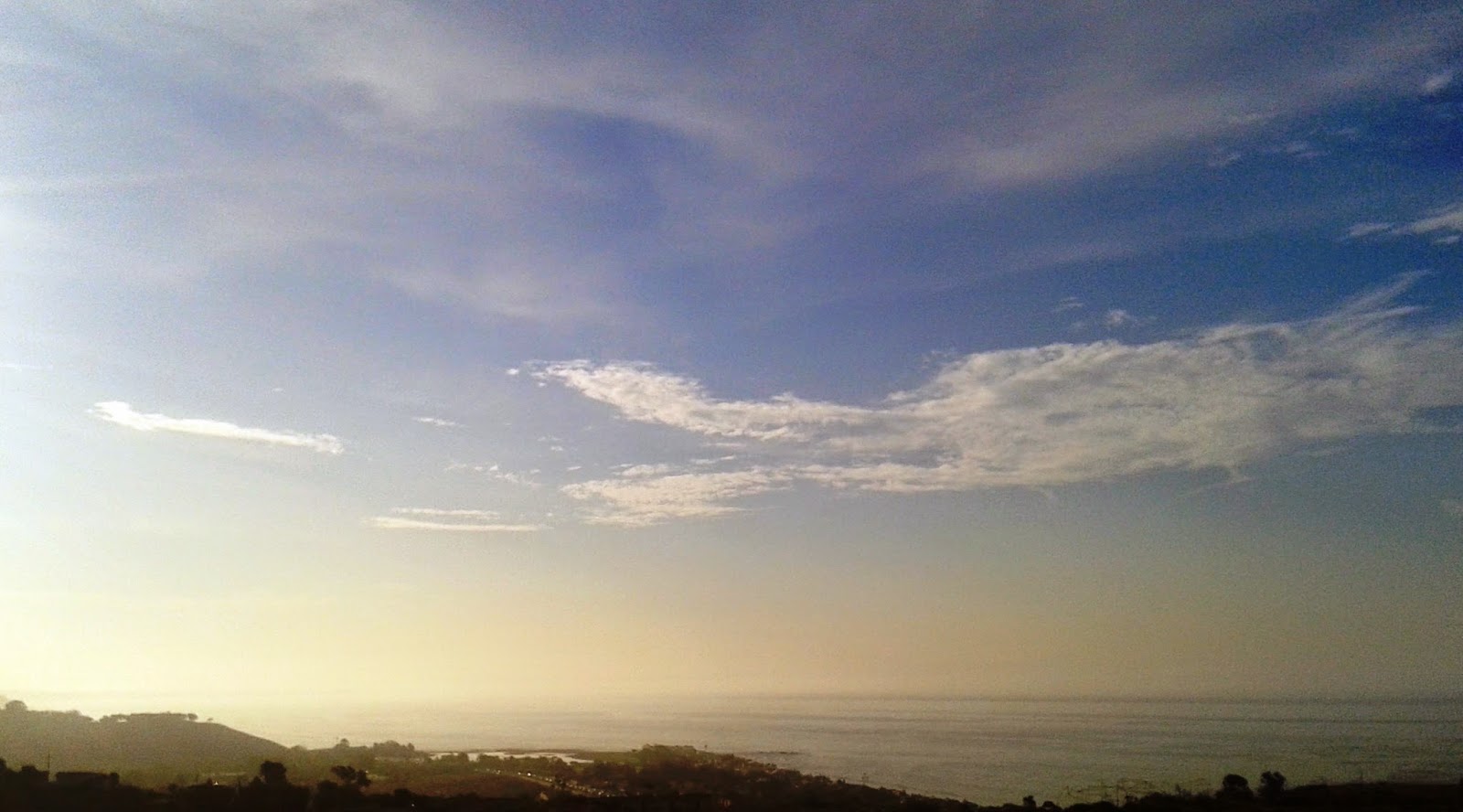 If I were one to give every picture a name, I'd call this one "Dragon's Head Chasing Skin Diver" and I think the skin diver will lose unless the next upstroke is a dusie... 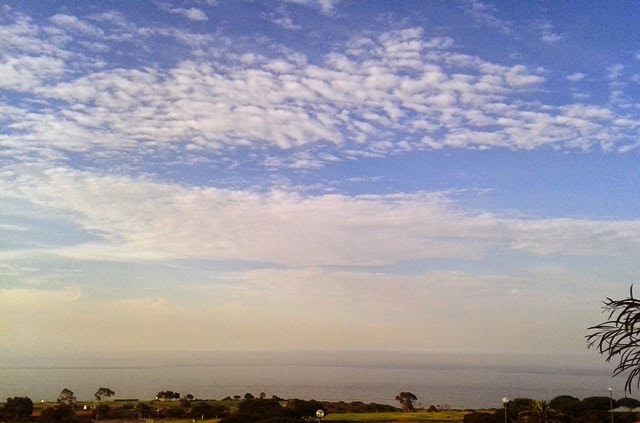 And here's the view just a few clicks to the right, getting away from the sun.

Another graduation is coming up and I'll be doing the job of reading names. I always like to put a call out to the grads that they call my voice mail and leave their name if people always get it wrong. And the mailbox is getting full.

One of my political science professors, a Greek emigre who had taught in many places around the world, told us that American roll calls are the hardest ones because the names are so wide-ranging. I had no idea I would be experiencing that phenomenon in such an applied fashion. Here are some of the more unique names that will occur on Saturday:

And there is not single "Smith" or "Jones" or "Johnson," but thankfully two "Garcias" (I'll at least get those two guys right...). My employer is sometimes accused of being not multicultural enough in its admissions. As the guy who's at the tail end of the process, the names do tell us something.

You may have not completed a degree by summer's end like these folks, but I hope you're working on something to check off in 2014. There are seven weeks of summer left, so there's time. Go do it.

Good Tuesday to you all, here's the coastal outlook this morning: 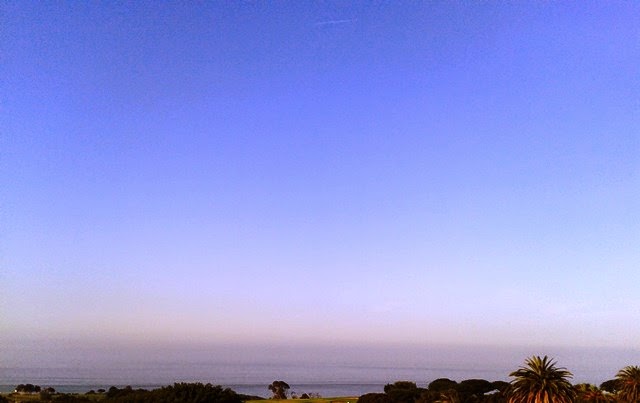 Clear today. No spooky clouds today. A nice layer of smog waiting to come back in with the inshore flow.

When I left campus last night, there were some deer hanging out in the parking lot. Deer on this campus are like pigeons in Hollywood--not unusual, just part of the everyday landscape.

I am always amazed how you cannot see them except when they are moving, unless they are against the backdrop of concrete structures or wide areas of green grass.

They are highly adapted to being invisible in areas of brown, yellow, and slight green. When you point a camera at them, they seem to disappear from your viewfinder, and so you just snap and then you find them later. No wonder they get hit by cars all the time.

Vincent Van Gogh died this day 124 years ago (from complications of a self-inflicted gunshot wound). I always got compared to him when I was young because I share the same first name and I painted pictures. There the similarity ends. No, I guess he was a Protestant too, and he had a good, supportive relationship with his brother Theo, as I have a good one with my brother Randy. 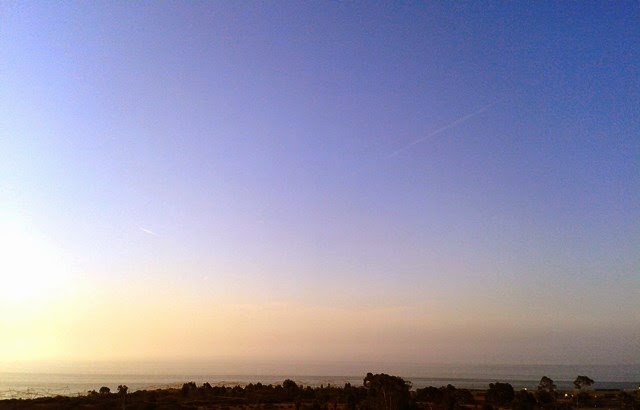 One more blue sky to try to pick you back up. What? Didn't work? T.S. Deal with it. Or go paint a painting or write a poem or ...

Posted by Unknown at 8:29 AM No comments: 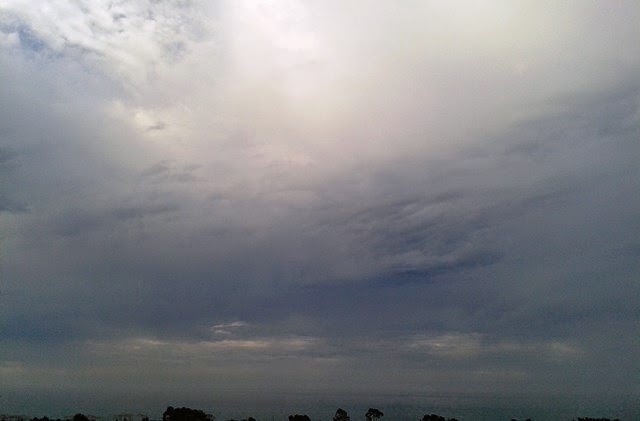 Some days it's all about clouds out here. I turned in all directions and it seemed like someone had a big ol' stick and was trying the stir everything...

Have a wonderful start to your week. 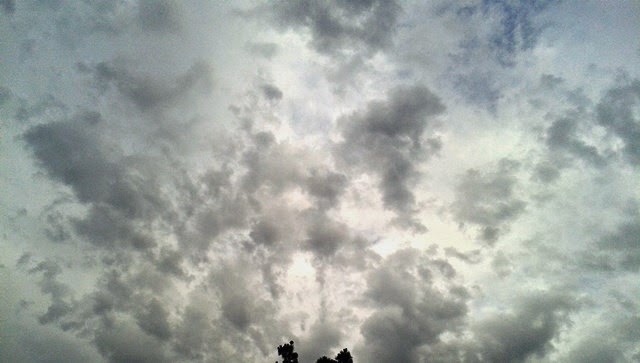 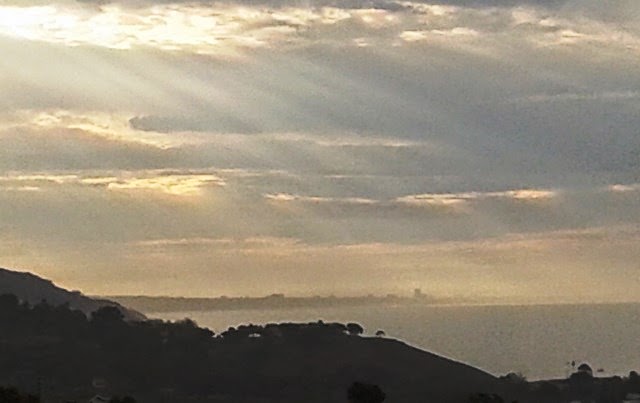 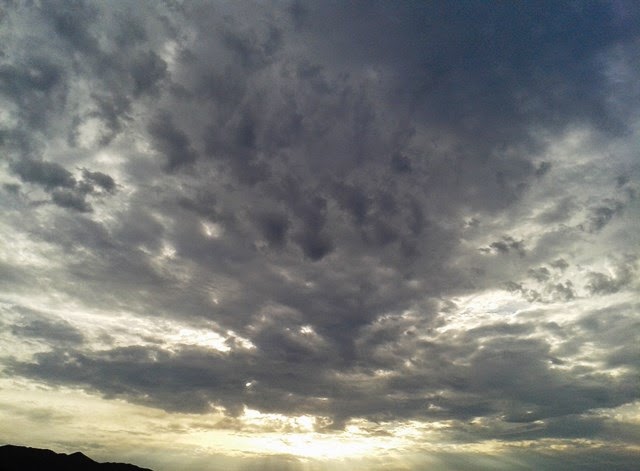 Posted by Unknown at 8:38 AM No comments:

How would you imagine a socially awkward and inept, middle-aged, bachelor engineer, who probably has not been on a date in years, explain to a bunch of girls young enough to be his daughters, how the American courtship and dating process works?

Over-thought is the word that comes to my mind. Actually a whole bunch of words came to mind; and that's Chapter 16 which will be split into two parts: the ask, and the date. Let's see, shall we?

Qin Qin: I am now recording. I have asked the three of you, the 2nd Princesses of Water Element, Dragon of the East, and Wood Element, or Ling, Nu, and Xiao Mei to recall and reconstruct everything that was said in our role-play lessons on August 1 and August 6.
Nu: Now THAT was a lot of fun. Probably the most interesting one that the Professor devised.
Ling: You think so? The whole thing just made me SO nervous. And afraid to ever visit America.
Xiao Mei: Me too. I was trying so hard to concentrate on remembering every little thing. At least for our parts in it.
Nu: And Auntie Feng was so funny.
Ling: Well, it wasn’t funny what happened to her afterward.
Nu: Maybe not, but even so. It’s very comforting don’t you think?
Qin Qin: OK, OK. Let’s reconstruct the phone lesson.

Clete: OK, pay attention class. Thank for coming to this special evening session to accommodate the participation of our guest presenter, Chilin Guardian Feng. We are going to have some fun with this. Now, let us start the phone call scenario. We are going to use these hand phones that I brought along that work on a closed digital circuit.
Qin Qin: Is that what you were setting up on the hill in Fire Domain?
Clete: Yep. I’m going to leave that relay station up. North Island and South Island can now talk to each other. Let’s proceed.

[Reporter’s note: He had rehearsed a script with Auntie Feng on how a conversation might develop between them. He punched in some numbers and then Auntie Feng’s phone rang, which she answered.]

Xiao Mei: Yes. That was pretty much how it went.
Nu: I think it was cute that Auntie Feng could not help but give him an order at the end.
Ling: I know. Habit eh? And that was Xingqi 3, a Wednesday. It was the following Xingqi 1, Monday night that we staged the date night.
Xiao Mei: It was all the sessions before that were interesting to me. Learning how to order in a restaurant or a coffee house.
Qin Qin: OK then. Let’s get that down next.

Posted by Unknown at 9:43 PM No comments:

Friday is here and so is the picture of the day: 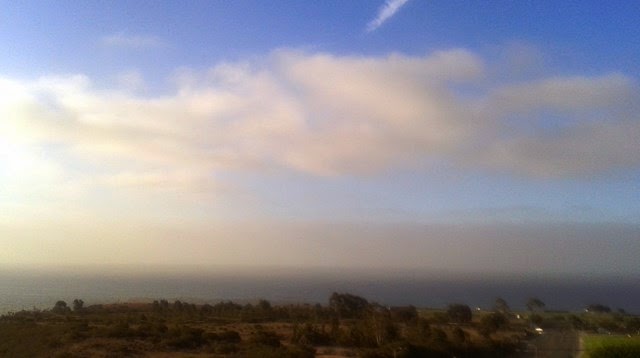 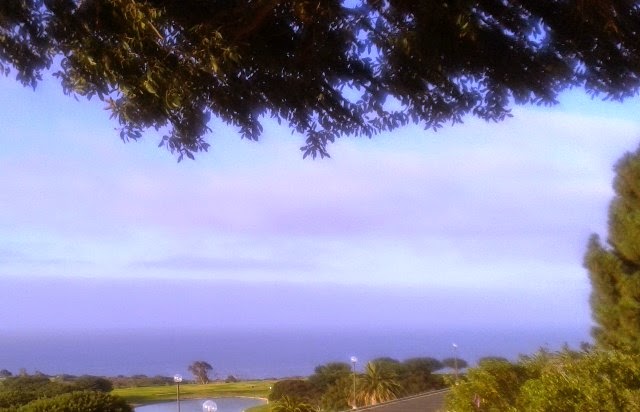 This one seems more like a sunset, but I assure it's the beginning of the day.

On the also-ran, the "Autofocus Nixie" could not correct for what seemed like an ambient haze this morning, giving us a purplish tinge and blurriness that filmmakers confuse with being in love.

Before you suggest that I may be falling in love, let me say say persish the thought--I've already had my shots. That is a pastime reserved for the young or romantic (or those whose glands are healthy enough to continue to pump out requisite chemicals). Wisdom and age, I'm afraid, are the components of the vaccination against head-over-heels foolishness.

But for those who are not yet so old, wise, or cynical, if you do go head over heels, this old fart's wish for you is that you land on your feet. Be careful out there. It's Friday. Wear your rubbers. Get to bed by 9, and home by midnight (...that ain't original, a Brazilian guy I met gave that advice). 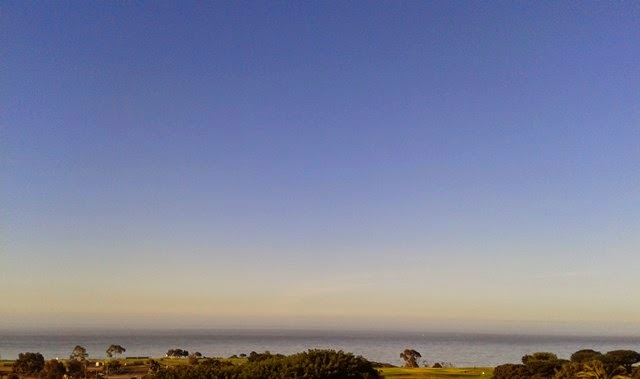 We're now in a "Groundhog Day" loop of cloudless blues. The diamon who dwells in my camera decided to give me ultramarine instead of turquoise today. And its a string of hot days here in L.A. When you get tired of looking at cement, asphalt, and drywall covered in latex paint, remember this URL.

I went to a meeting of the Greater Los Angeles Writers Society last weekend for a presentation on "Creating Strong Female Characters." The presenter, screenwriter Christine Conradt, answered the question of whether men can write women or the other way around--primarily dealing with the question "Is there a basic gender difference?" (Which would then inform you that you must have women/men say or do these things...)


The answer is "no." And as observers and students of human nature, we all knew that. We were all pretty sure we could find exceptions to any generalization you could make about one sex or the other.

BUT, if you want to make mega-$$$ as a nonfiction writer, it's worth trying to write a book about sex generalizations to sell to the millions of people out there trying to salvage their marriages or  relationships--because relationships are HARD to maintain and people are desperately looking for help. John Gray of Mars/Venus fame is laughing all the way to the bank. It was a fine presentation with a lot of sound ideas on how to create complex characters. She's the kind of person in Hollywood whose work you've seen, but you'll never know it.

Signing off. Have a great Thursday.

A Good Wednesday to you all. Here's today's picture. 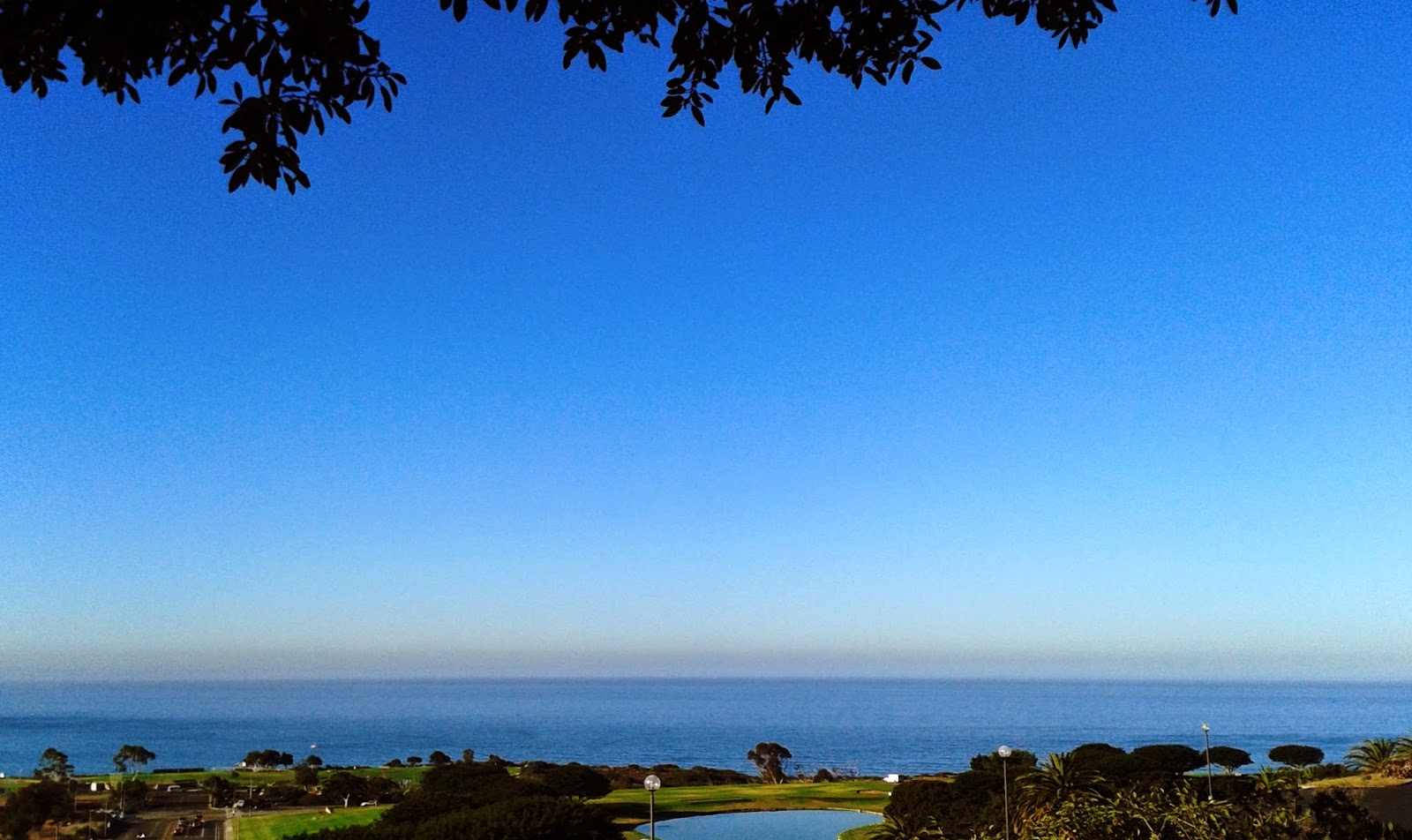 The camera decided to give me a Maxfield Parrish sky today. I left the dangling leaves in just to suggest it even more. For those of you who are not fans of early 20th-century magazine illustration, Parrish was a commercial artist of the time who perfected this color of sky as a backdrop for his scenes of idyllic bucolic or exurban scenes populated with lightly clad women accompanying ad copy (nothing changes in advertising does it?).

Those of you who enjoyed watching the movies The Princess Bride and Star Wars: Attack of the Clones most definitely saw Parrish-inspired landscapes (you might even think that was the best thing about Clones). If you read Parrish's biography, he used himself as a photographic model to set many of these poses. If you know that, it becomes very obvious why a lot of his pictures look like old photographs with the lighting diffused much more than cameras seem to capture focus and light today. He of course put his signature touch on things (he was a genius, not a mere copyist) but the source of his inspiration is clear.

Back to Malibu. Here's a wider view a few steps away  with a more sun allowed to flood the lens. This shows you the smog ready to flood back in later today. This almost reminds me of some country's flag.

Enjoy the blue today. Be serene. Be calm. Be pacific.

Posted by Unknown at 8:36 AM No comments: