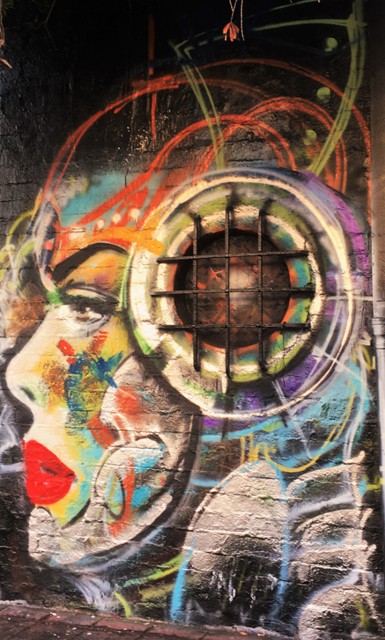 OK, this image probably has all kinds of allusions (what appears to be memorial portrait [angel wings, halo]; face looks like a particular person, melted bat, name "Yore"), but I'm afraid I don't get any of them. I DO know that is the L.A. Dodgers logo he's wearing there on the left sleeve.

Immediately to the right of our angel athlete is a stylized portrait of a young woman. The basement-level porthole window has been worked into this portrait's head, giving this woman a cyborg-like vibe. The varied fireworks of the spray-painted lines give this image a punk-festive look. Love the X-ray vertebrae anchoring her firmly to the ground.

Moving right along ever rightward, we have got a wall of classic name-identity art. This is a dynamic wall. I've  been monitoring this wall for a while and this particular portion keeps getting layered upon. There are at least five layers that I've noted since I have begun watching several weeks ago.

This particular wall has four metered parking spaces in front of it. I've been waiting for a day on my morning commute when all parking spaces are clear so that I can get a good photo shot; it's taken MONTHS of waiting. Finally a such day showed up. 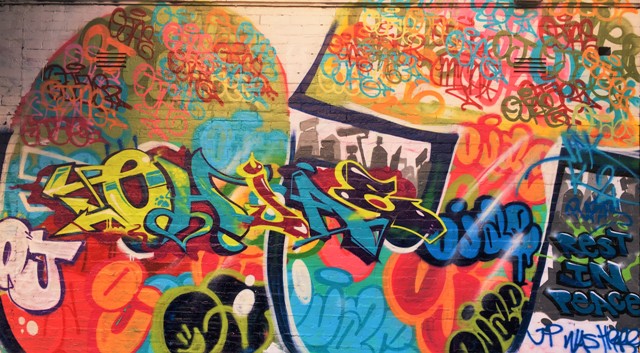 This panel has an overall feel of a joyful, a psychedelic whale splashing down North Kingsley Drive. And here we have the last panel:

... more layers of name-identity art. If you're having deja vu--YES you have been here before. This wall has gotten refreshed at least twice since I've been running this blog. (about two years). We had a Grinch lookalike in an icy landscape at one time. 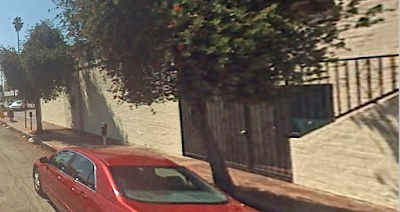 I was curious what the Google picture truck captured when it went by. It went by a few months ago because it has a version of this mural as it was going up, but if you stop and look at the garage, it picks up a view probably years old, before the graffiti artists were given both full reign and free rein.

It had the look of just another Sinclair Paints Navajo White apartment house. See? I'm sure the neighboring property owners liked this street scene much more, but street life must poke through now and then.Good thing for us followers of popular aesthetics.

It's time to pay the rent kids, so I must leave you now. But keep tuning in; if you don't like what you see, wait a bit and something will eventually come along that you love.

Persevere and love one another,
Pops

A Happy Fall to you all!

I was heading down Western Avenue one day recently and happened upon this new image:

The great sage "They" tells us that what really counts is what's on the inside. I think this sentiment is captured quite succinctly in this image, don't you?

Like underground comic artist Robert Crumb, I like big legs on females. I'm pretty sure the main figure here is female ... but if not, who cares? And it's great thing she has big legs. The bigger the limb, the more imagery!

I mention Robert Crumb because this piece reminds me very much of the underground comics I discovered as a wee lad in the 1970s. They were all black and white and sometimes there were just pen-and-ink pages that were simply a wandering landscape of weird images all linked together. 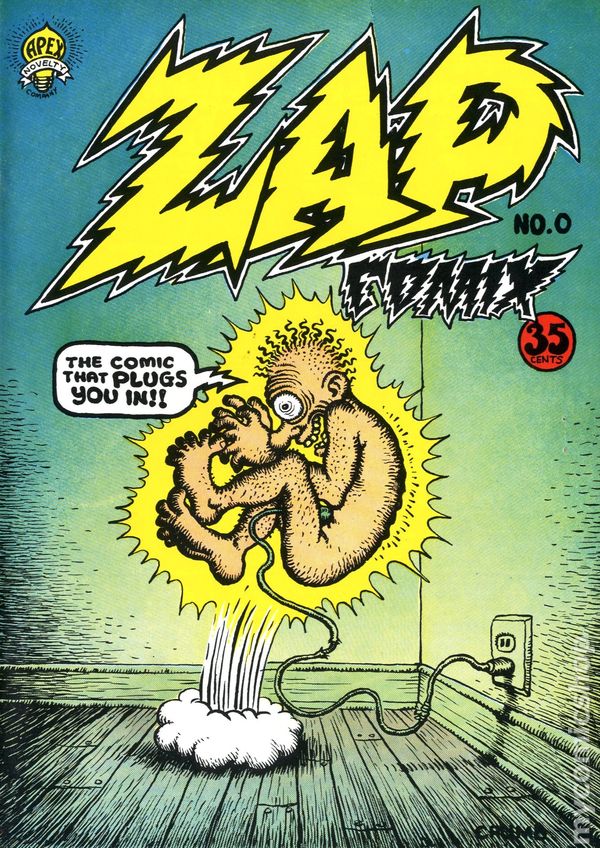 I remember my first discovery of underground comics. I used to go to Bennett's Book Store on Hollywood Blvd. and pick up the latest copies of Warren Publications Creepy, Eerie,or Vampirella, or other smaller format comics like Marvel and DC. As I walked down the boulevard I noticed a small store on which part of the signage said "Underground Comics."

I had NO idea what an underground comic was. I was probably 12 or 13. I believe it was called the "The Bald Eagle." I knew nothing of the other kinds of stuff they had there. I smelled of incense and was quite dark. I would later learn that such a place was called a head shop. I saw the familiar structure of the revolving comic book rack and headed straight for it and started looking. Zap #0 was the first one I picked up. And I had never seen such a thing. This was nothing like Superman, Action, Archie, House of Secrets, etc.

The guy behind the counter had no problem selling it to me, bless his heart. This was my introduction to non-linear storytelling (oh, and there was sex and drugs to learn about too...). Hollywood Boulevard was a very different kind of place back then too. Right on the same block I'd pick up the bus going east toward home.

I stood right in front of the Gold Cup Cafe, which had become a hangout for gay men. So there was much spirited greeting between guys who knew each other as they came in and out. I remember calling my Dad once to come pick me up because it was going to rain and he told me not to stand in front of that place. I guess he knew it's rep as indicated in this Jackson Browne song:

"Down at the golden cup
They set the young ones up
Under the neon light
Selling day for night"
[Jackson Browne, Boulevard, 1980] 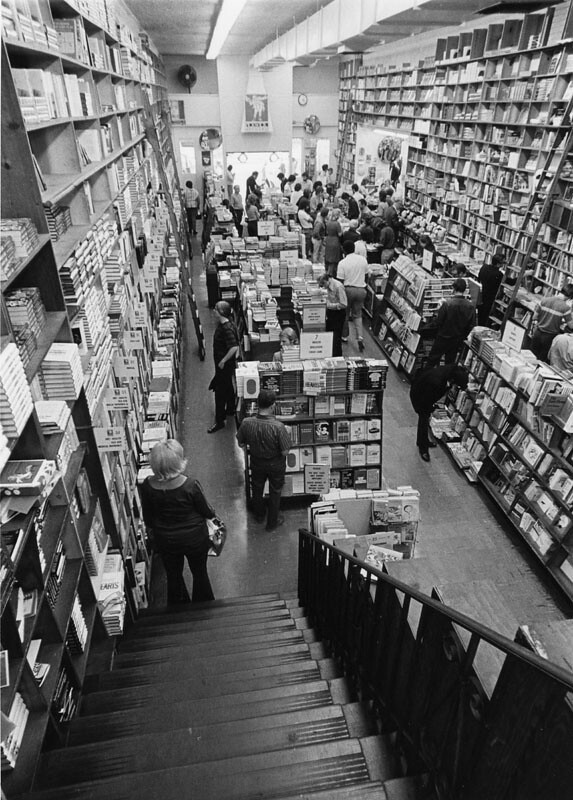 Another go-to spot on the boulevard was Phil Harris Records where I would go and find whatever I could on sale to augment my record collection of classical music--my tastes at the time ran to the 19th-century romantics because I was a trumpet player and loved to hear brass sections.

When me and my brothers were small, my Mom would take us to Pickwick Books which was also in the same vicinity. She was always buying romance and historical fiction. The place had three stories. I believe the nonfiction books were on the 2nd floor. The 3rd (it was probably just a loft) floor was my favorite though. Mom would frequently tell me I could spend X number dollars and they had all the bargain remainders up there going for mere cents.


Alright, that's enough of that. Time to pay the rent kids.

LOTS of love to you all!

We've just come off of a big patriotic holiday so how about a good ol' American eagle today? 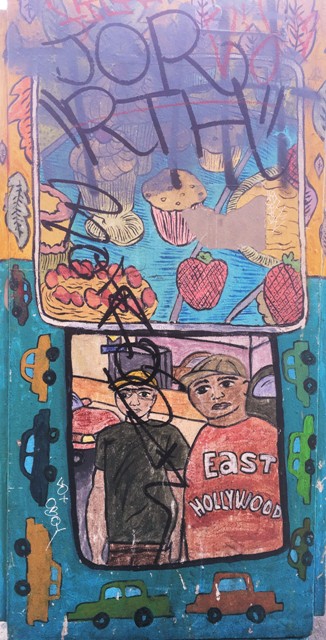 If you're thinking that looks like the lid of trash dumpster just above the wing on the left, you would be right. Here we have a red, white, and blue eagle spreading their wings, protecting the skyline of what I'm going to guess is Los Angeles.

You have to walk down a dead-end alley behind a Methodist church off Sunset Boulevard, right new Kaiser Permanente to find this one. I'm guessing the only folks who get to see this work are custodians, criminals on the run, and street junkies who have found a quiet place to partake of their recently acquired recreational substances.

Sam the eagle seem lonely on this page all by hisself so I'm throwing in a bonus utility box that proudly announces my home turf of East Hollywood. This was probably a local schoolgirl's civic project from a nearby school. Maybe I'm being sexist, but it would not occur to most boy artists I know to create a street mural of cupcakes, pies, and tarts. This mural is quite old surprisingly is free of "hate-on" graffiti (only a couple of writeovers), but the charm of it still shines through.

Thanks for looking in. This blog is still looking for a stride having been cut off from its original scenic content, but have no fear--something will show itself in due time.

The clock on the wall says its time to go kids, so we'll see you back here soon.

Posted by Unknown at 9:13 AM No comments: