iT'S STreeTarT THurSDay iN eaST HoLLyWood! w/Malibu Evening Pic of the Day - Thursday, 3/30/2017

I got your Best Girl for this week ... ready for her?

You cannot miss this dreamy adolescent girl as you traverse up Western Avenue, just off 2nd Street. She apparently lives in a gray, monochromatic underworld, but her mind explodes in brightness and color. So what do you see in those shapes in the torrent of yellow, red, and blue? Be careful of what you say ... probably says more about you than it does about her.

I was back visiting my old parking lot space at the campus of "Malibu Community College." Could not help snapping off a seascape for old time's sake to share: 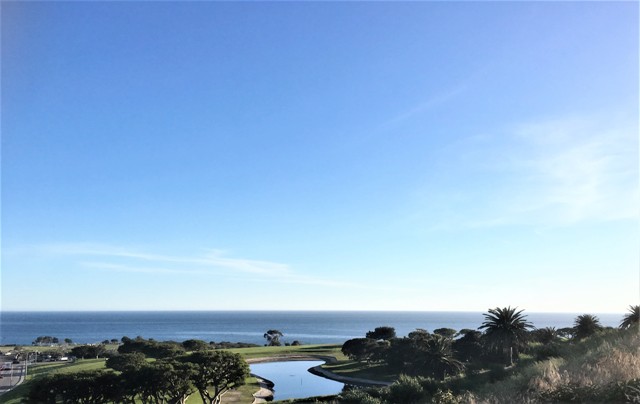 I was there to hear a lecture by Niall Ferguson who was guest lecturing on the application of history to our current political state. The primary takeaway for me was beware of false historical analogies that  a man's political enemies would propose. If we were in a true fascist regime (as many seem to believe we are), the two federal judges who struck down those controversial executive orders would be dead now. And if I were the tyrant, I'd make sure their times of death coincided, just to make a point.

I'm glad to see the check-and-balance clockwork that the Founders put together, actually works. In my lifetime I've seen the impeachment mechanism fired up and set in motion, and each time we marveled, "Hey, it works!" So, relax. As long as everybody does their job and follows the script, it'll be OK. Maybe other business doesn't get done, but at least we don't go over the deep end.

Have a wonderful rest of your Thursday people.

Posted by Unknown at 5:32 PM No comments:

Today we wander outside of East Hollywood over into Hollywood Proper, just because I have something nice to show you from our "Out of Bounds Gallery."

A few weeks ago a was traveling along Santa Monica on my way to Malibu one morning and traffic stopped me alongside this burrito shack about at Highland. I looked to the right and saw such a pleasant "sun" greeting me with the rise, that I had to pull over and take the shot.

We've got the maker's mark there, signed "colombia."

These roadside eateries are all open window, so muralists who paint them basically have to fill up little panels that below and beside large wall openings, and that goodness for us that they do!

This shack is sunshine yellow overall and you can help but feeling all warm and new and like it's a fresh beginning when you are here taking it all in. The guy was cleaning and not ready for business, otherwise I would have tried buying something to eat. Guess I'll have to go back later.

There are five shots overall in this set. Hope you enjoy them. 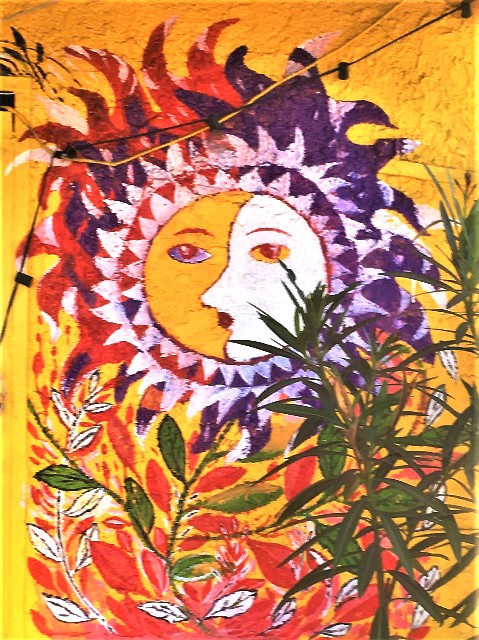 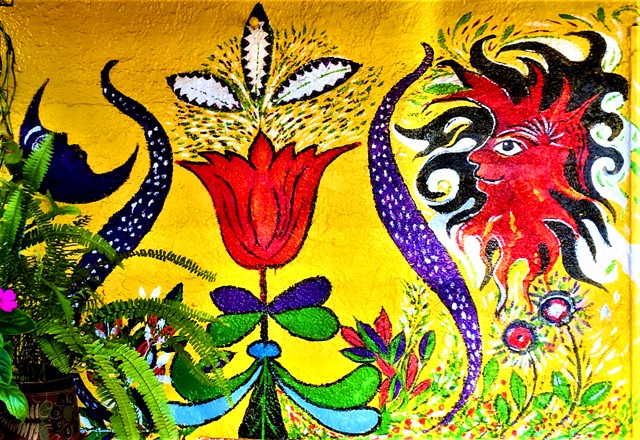 The duality of sun and moon is in everything here although we seem to be in the kingdom of the sun for the most part (bright yellow). All of the flora vibrates with energy. A perfect bouquet from a street artist to usher in our first week of spring in Angel City.

Take care of yourselves because I love you.

Today I'd like to present a set of four smaller-focus works. Notice I said "focus." These are all pretty big, size wise, but they don't have quite as much development as other things that I tend to throw up on the wall here.

This one is found on Heliotrope Drive, on the side of a shed that has been a bike shop, a gift store, a storage place, and many other things over the years. It's one of those works that are 50% poetry and 50% visual, rather like Chinese scroll paintings that have poetry on them. A limited palette here, as you will see on the others as well.


This here is to be found on a beauty supply store in nearby K-Town. We've got an artist's mark there, as well as a phone number. (The family name looks like Kim to me, but I think there's maybe one stroke too many for that to be the case.) Apologies... This here is entire store front in just plain black and white--it's quite striking to walk past it on a bright sunny day as I did. It's a ink-splashy aquarium of a sort.

Here on Hollywood Blvd. we've got more adornment of a commercial building. This is name art on roll-up steel riot doors. Limited palatte of brown and gold. Us Old-School Long Beach State alums relate to these colors (used to be our athletic colors). There's other name art facing this parking lot, but this is the most expertly executed of them all. 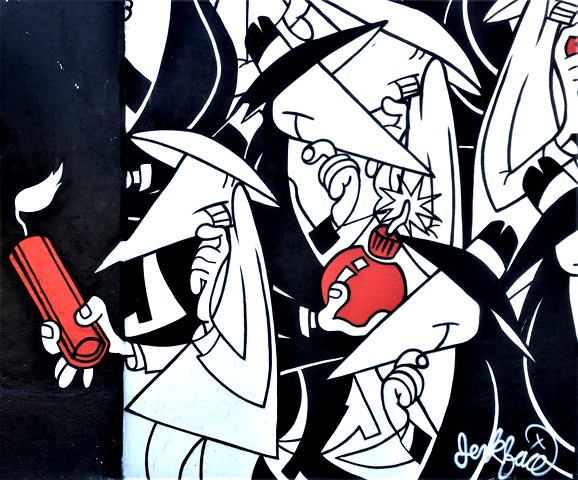 And here's a reprise of a work on Melrose that I presented before, but when I drove by this last weekend I noticed they got rid of the iron fence they previously had in front of it. So here is Spy vs. Spy by Jerkface once again, unimpeded.  Again a near monochromatic palette.

I hope you're all enjoying a wonderful week as we wind down to the end. I've got a band concert to play this Sunday afternoon. I'd invite you, but nobody ever comes. Unfortunately when the ol' bassoon goes into the case afterward, it's going to stay there for several months (or possibly years) as I have to spend time other projects of life that must be dealt with. It's been fun finding my "fagotto soul" over the last decade and a half, but you learn that episodes, interests, and even people in your live have a season, and you must know when something else calls you to its attention.

We'll see you next week with more art God willing and the crick don' rise...

Dear Street Art Lovers, as well as those who love other things:

Since we just moved off Mardi Gras and Ash Wednesday, let's move on to some art in a tradition that is contemplative, but wants to get you away from all that "downer" bad stuff [and the "upper" good stuff too, cuz that apparently causes suffering eventually too ...].

Join the crowd of enlightened beings and let's get past all this suffering. There's a meditation center around the corner from my house which I have mentioned before. There used to be a memorial portrait of a dead member named Curtis on this wall, but I suppose he's been memorialized enough and art is a river in this part of town, especially street art. It all passes by, so enjoy it while you've got it. 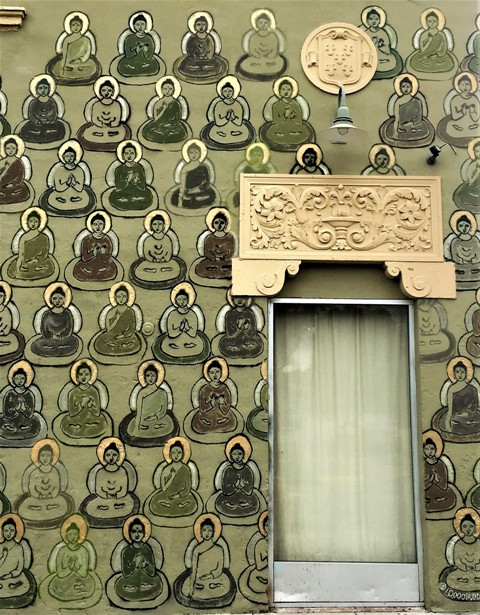 Didn't take much digging to find out that this is part of a larger project by this artist to paint 10,000 Buddhas. If figure on this wall, she's gotten about maybe, 340 toward goal? See her website. 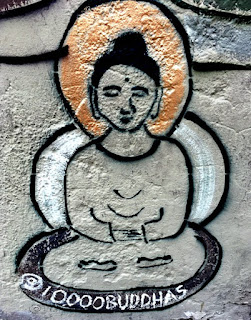 If you're thinking the term "10,000 Buddhas" sounds vaguely familiar, there are monasteries in Hong
Kong and Ukiah, California, a pagoda, and a cave in China with old wall paintings that all sport this name. What they all have in common is, you guessed it, a lot of representations of the Buddha in one place.

But why "10,000?" If you know some Asian languages, 10,000 is the term that stands in culturally for the concept "really big," kind of like "million" does it for us Americans. Hence: "I feel like a million bucks!" "Thanks a million!" I guess there's been less inflation in Asian countries...

Anyway, here's to that artist's meeting her ambition of painting 10K, cuz ambition and the celebration of excess are primary Buddhist virtues right?

Posted by Unknown at 9:20 AM No comments: